Complex implementation of the DEKORIA service and commercial building with accompanying technical infrastructure and installations. The commercial and service part of the building is one-storey hall with the main supporting structure inform of prefabricated, reinforced concrete columns, with the roof made of steel structure, the office and social part is the two-storey building in the monolithic, reinforced concrete structure.

Complex implementation of the single-storey production hall with steel structure (one-nave) and two-storey facilities. Main frame span 1×24,39m with axial distance a = 6m. Hall walls areencased bysandwichpanel. The roof of gable hall with inclination of 70 covered with a roofing membrane. The roof of the backrest facility is flat and covered with membrane. The backrest facilitywalls are made of ceramics, finished with elevation panels on steel frame. Access roads and yards of 2.525 m2area with the surface made of paving stones.

The scope of works included the complex construction of production hall with area of 2350 m2, two-storey office building in traditional technology of 650m2 area. Moreover,the exit from county road, two rainwater tanks, roads and parking lots in the investment premises were constructed.

Final executive design and realization of the modern warehouse building. The Hall made in the prefabricated, reinforced concrete structure.

Complex realization of the production hall with warehouse in steel construction. Office building with whole necessary installations in traditional construction.

Complex project and realization of production object for making of industrial devices, with premises management. This object was realized in two stages. In 2013 we built the production hall with overhead cranes, of utility area 4 500 m2 and social rooms of utility area 550 m2. The main carrier construction is made of steel. Two-floor social building was brick-made.

Complex project and realization of steel construction production plant. Such construction was made in two stages: In 2005 we built the production hall of utility area 3 100 m2. The plant was extended in 2015 by successive 5 900 m2 of production area and 1 200 m2 office area.

The scope of works covered complex realization of investment. The plant was several times extended over the years. In 2005 there was made two-floor office building of utility area 1 400 m2 and production hall of 4 700 m2 area. In 2008 there was added the warehouse hall of utility area 2 300 m2.

Complex reconstruction of the earlier existing halls built in the years 2010 and 2011, by the Enterprise “Przedsiębiorstwo&nbsp; Dombud&nbsp; Sp. z o.o.” Ltd. Co. from the warehouse into the warehouse-production object. This object was classified to the group of the higher risk objects. Realization was related with reinforcing of the existing construction, making of combined production platforms, steel technological estacades and addition of technical objects. This object was equipped with technological installation, installation of water and foam sprinklers, gas detection system, fire signalling, compressed air system, iced water system, general mechanical ventilation and&nbsp; failure ventilation system.

Complex project realization of production-warehouse hall with premises and management.

In 2009 our company realized the warehouse hall, together with social object of 3 200 m2 area, and terrestrial fire-fighting tank. In 2011 there were added successive production buildings of 1 050 m2 area, with the underground warehouse tanks of 1 600 m3 volume.

In 2015 we performed a successive production-warehouse object of 2600 m2 area, this time in form of main carrier construction made of reinforced prefabricates with fire retardant class of the building: “A”.

Complex realization of the production hall, with the social-office building. In 2013 the plant was extended with the lacquer painting building.

The scope of works covered complex making of the two warehouse halls, with social rooms, wood processing hall, together with the roads and premises management.

Project and realization of the production-warehouse hall, equipped with overhead cranes and social-office building.

Complex realization of the modern production-warehouse object, together with roads, premises management and installations. 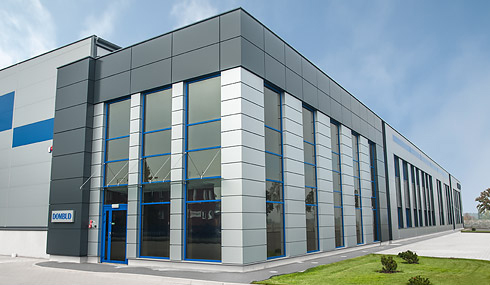 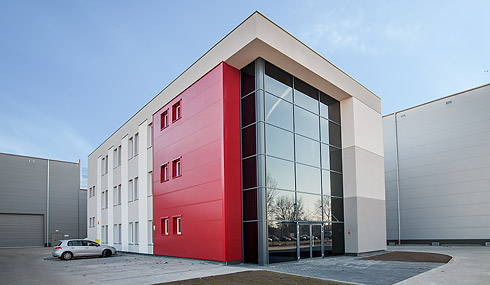 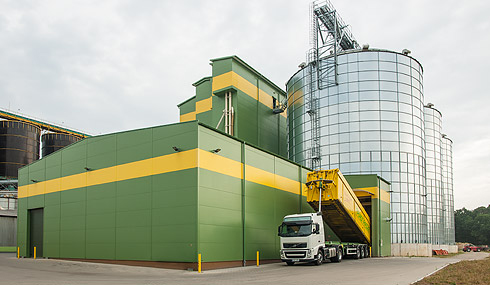 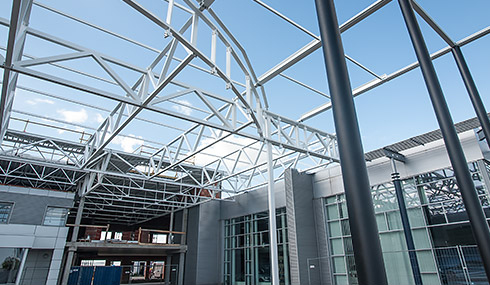